One of the more frequent questions we encountered upon returning from Haiti was about the damage from the 2010 earthquake.  And to be sure, words and pictures cannot adequately describe the destruction we saw.  Millions of people are still displaced and living in tents.  Millions more are attempting to rebuild out of the rubble.  Nearly the entire country is crippled with lack of access to clean water and supplies needed to rebuild.  Yet despite these dire circumstances, we found the people of Haiti to be filled with hope and optimism about their future.  In a sense, the earthquake brought the people together in a spirit of unity that did not exist beforehand.  As our friend Sam pointed out, “We are a unified people now because everybody lost somebody.”

It would be the first of many contradictions that we witnessed in Haiti.  On one side of the street would be a trash heap filled with garbage, feces, and flies.  A quick glance to the other side of the street might reveal a breathtaking panoramic of the beautiful, mountainous Caribbean countryside.  A five minute drive away from a desert climate could quickly turn into a tropical climate.  A few minutes spent conversing with individuals in “the poorest country in the Western Hemisphere,” revealed not dejection but contentment. 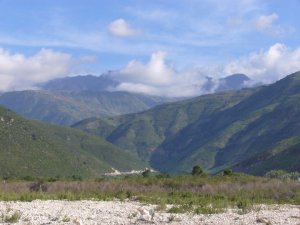 And the coolest thing about these contradictions is that God is in the business of bringing hope out of destruction (resurrection anyone?).  The spirit of hope and unity that we witnessed is largely being fueled by a nation that is crying out for the God of Restoration.  To quote Sam, “At the time of the earthquake, everyone was crying out for Jesus…everyone.”

I am a husband, father, United Methodist pastor, Wolfpack fan, and outdoor enthusiast who loves meeting new people and hearing their stories... All while trying my best to love God and love others!
View all posts by Parson Carson →
This entry was posted in Haiti and tagged Haiti, mission trip, serving. Bookmark the permalink.